History of our Club

The Club was founded in 1961 by the late Howard Dingle with others in direct response to the drowning of 6 people at Holywell Bay the previous year. In those days the Club provided the lifeguard and paid his wages. All the funds were raised from local businesses and by club members through beach collections, carol singing in the winter and the surf club auction which has been going ever since.

The first club hut was a wooden construction. Financial help was received from the old Truro Council via Harry Rodliff, a county councillor who also loaned his tractor when they needed help on the beach with supplies.

For the first few years the club was a busy place with juniors and seniors. The first bronze squad was formed.

The first club member to gain a bronze was Stan Yeo. They also did a first aid course and Peter Robert’s certificate can be seen displayed. You will notice how small the Surf Life Saving Association was then. Swim training was at Perransands. The clubs’ first vehicle was as Jeep loaned by Fred Grey, a local campsite owner, unfortunately it did not float very well!

In the late 1960’s a new concrete hut was constructed. Lifeguards used to sit on seats raised up on scaffold poles and in quiet times repaired Volkswagens.

Through the 70’s the lifeguards Dave Taylor, Pete Gaisford and Ray Turvey were funded by Carrick District Council. The club was very small basically at a standstill, it began to grow again in the 80’s when more youngsters became involved in the beach and surf life saving.

In 1982 the feature film Top Secret utilised the beach for filming and turned the hut into a Californian beach bar. Commercial Union also filmed an advertisement on the beach dropping a car off the cliff. The film crew returned to retrieve the car when the tide had dropped to find it completely stripped!

All kinds of things were done to raise money to keep the club hut in good order. One event was a beach party; the windows were taken out of the hut and beer and cider provided by the Treguth Inn was sold. There was a DJ and the beach was Ppacked. One of the highlights was the ram roast and when the queue got too big to keep everyone entertained they played ’Oops upside your head’ and hundreds sat down in long lines and rowed. The queue for parking stretched almost back to Cubert! It was a great evening but by the time all the overheads were paid it actually made only £10, good fun for no money!

The surf club auction was and still is our main fund raising event. This started in 1961 at the Treguth Inn and stayed there until 1995. The original auctioneer was Trevor Wilson and when he retired Adam took over and has done in it ever since. The auction transferred to the Smugglers Den in 1996 where it marked the start of Christmas on the first Saturday in December every year. It has raised a staggering sum of money over the years. 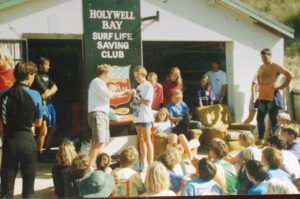 In the early 90’s Nippers started, this was to prove the resurgence of the club.

Holywell Bay were the first ever Cornish Nipper champions. The competition was at Bude and nobody had really heard of Holywell Bay and as a brave team won more and more events during the day people were saying ‘who the hell are Holywell Bay?’, they were rather surprised when they won! As the initial Nippers got older they became nipper juniors and juniors but kept their winning ways coming second on two occasions at the Cornish championships.

Many of our Nippers have gone on to become lifeguards both here and in Australia. One of the benefits of the Nippers is that mums and dads have become interested and become members they too have taken qualifications and in 2011 more members took their lifeguard exam than ever before. The club now proudly boasts a membership of over 200.

In 2002 the club hut was once more turned into a film set for the James Bond film ‘Die another day’ unfortunately Pierce Bronson did not actually come out of the water, it was a stand in, but viewers at the cinema still think that Holywell Bay is Hawaii!

One of the most important decisions was that of updating the club hut, lottery funding was investigated but this proved too expensive and therefore a non-starter. It was decided to go it alone, a budget was set that could be afforded and the skills of our new members were utilised. RNLI paid for the sewage connection, work was started at the front of the hut finally finishing the rear 18 months later. All building work was done for free by club volunteers. The original budget was 50k which we came in under. With the hut refurbishment the club has grown to its present form.

The club has had help over the years from other clubs and individuals from surf life saving and we would like to take this opportunity to thank them together all the examiners and instructors who have given their time.

What makes a good club? The building helps but really it is the members, we are probably the most laid-back club in the country… and probably the best! 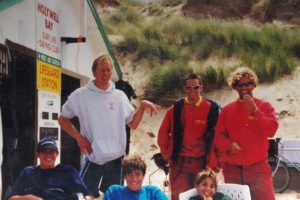 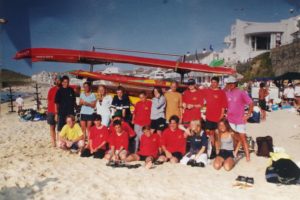 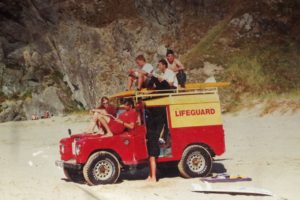 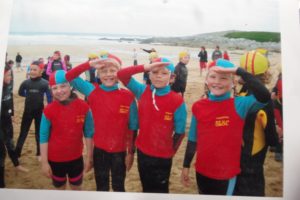 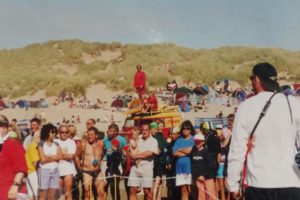 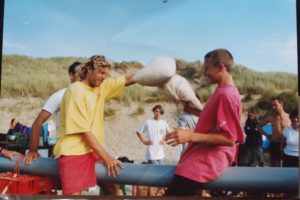 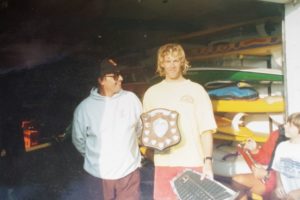 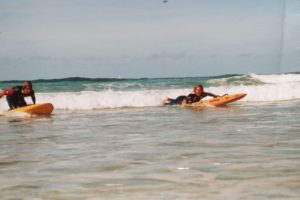 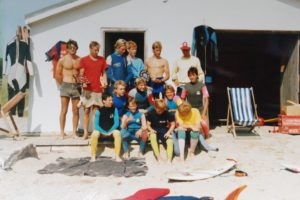 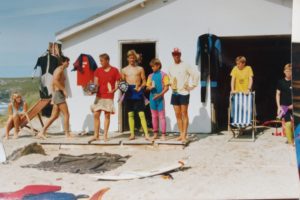